What Type of Trout Did I Just Catch?

“What type of fish are we catching today?” This is one of the first and most common questions clients ask their guide when departing for their fishing trip. The easy answer is “trout”, however we live in a region where there are multiple species of trout in our creeks and rivers.

The two most common species on the Eagle River are the rainbow and brown trout. Smaller creeks are perfect locations to target brook trout. With a little research and some hiking, you could find yourself in great cutthroat trout territory. I’m going to break down the different types of fish that we catch and hope to clarify the difference between these beautiful fish.

Rainbow trout were first introduced to Colorado in the 1880s and are one of the favorites for many anglers. This type of trout is commonly stocked annually in many of the local lakes. Rainbows are pretty easy to distinguish between other types of trout due to their dark spots on their light, silver bodies. They often have a “rainbow” horizontal pink to reddish stripe along the side of their body. On the Eagle River, an average rainbow trout is thirteen to seventeen inches, with some growing well over twenty inches. They are strong fish and always exciting to have on the end of your line. 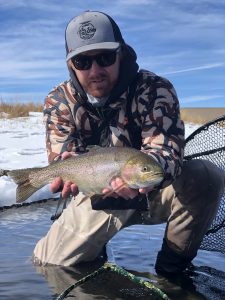 Brown trout are not native to Colorado, in fact, they are not even native to the United States. They were introduced to the waterways of Colorado in the 1890s coming from Germany and Scotland in the form of eggs. Brown trout are now widespread and have wild, reproducing populations throughout the state. These trout are typically very aggressive and are great fighting fish when hooked. Their dark large spotting patterns, reddish dots, and bright yellow or orange bellies help separate them from other species of trout. Brown trout are territorial and will sometimes stay in one good hole for a long duration of time. They are known for eating baitfish, other trout and even mice that find their way into the river. 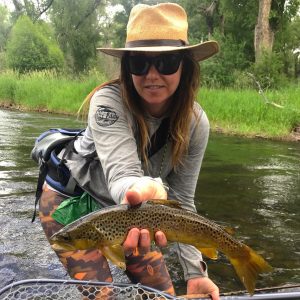 The brook trout is a prolific fish that can take over a waterway and outcompete other trout. They are found in high mountain lakes, streams, beaver dams. These trout are usually eager to rise to a large variety of dry flies and terrestrials. Brook trout are beautiful fish that have whitish worm shaped spots on the top of its dark body, bright colorful spots along the sides, and white tipped fins. 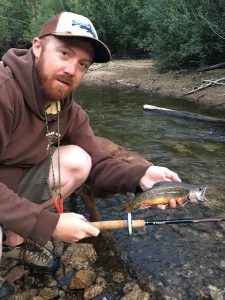 Cutthroat trout are the state fish of Colorado. There are several subspecies of cutthroats found throughout the state, with the greenback, Rio Grande, and Colorado being native. Cutthroat trout are very sensitive to climate and habitat change. This has lead to the decline in the number of cutthroat caught in the local rivers and creeks. The greenback cutthroats were presumed to be extinct in the 1930’s and in the late 1950’s they found small populations in the high country. Ever since this discovery, there has been a conservation campaign to reintroduce these fish back to their native areas. Cutthroats will have heavier spotting towards their tail and a red slash on their throat or gill area. These distinct colors help distinguish it from the rainbow trout. Cutthroat are, in my opinion, the most beautiful of all trout species. 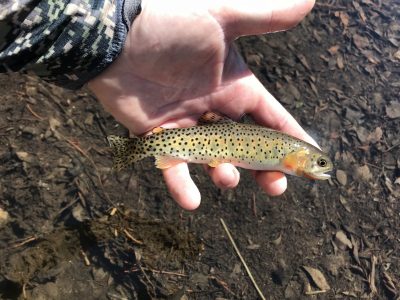 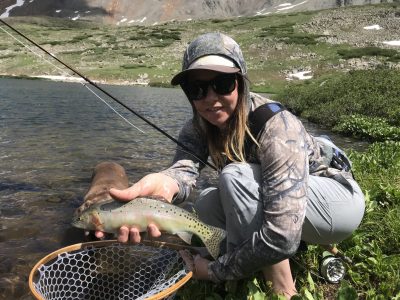 The tiger trout is a sterile hybrid cross between a female brown trout and a male brook trout. They are very rare in nature and are a trophy catch at all sizes. These hybrids occur in areas that have a larger population of brook trout than brown trout. Tiger trout get their name from the marking on their backs and sides that resemble tiger stripes. Beautiful and, in nature, an abnormality, tiger trout have a special place on many anglers bucket list of fish to catch. If you catch a wild tiger trout, consider yourself a very lucky and fortunate angler. 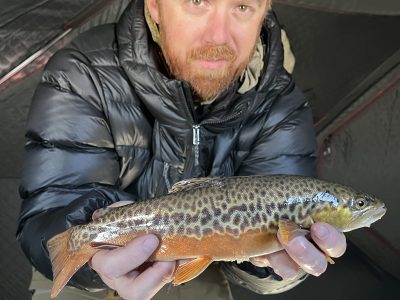 Catching a fish on a fly rod is a major accomplishment and knowing what you just landed in the net makes it even more satisfying. Challenging yourself to catch different species can be extremely fun and gratifying. Some species require extra research and difficult hikes or demanding environments. Some species will make you drive further distances to different locations and river settings. Whatever fish you want to catch there are places all throughout this amazing state to chase your dream fish. Get out there and explore.

Meet us in
Salida, CO

My Pack on My Back

Did you receive a new fishing pack for the holidays? Or did…

The Unspoken Rules of the River

Stop Being Intimidated by Fly Tying

For many, the thought of getting into fly tying can be intimidating.…